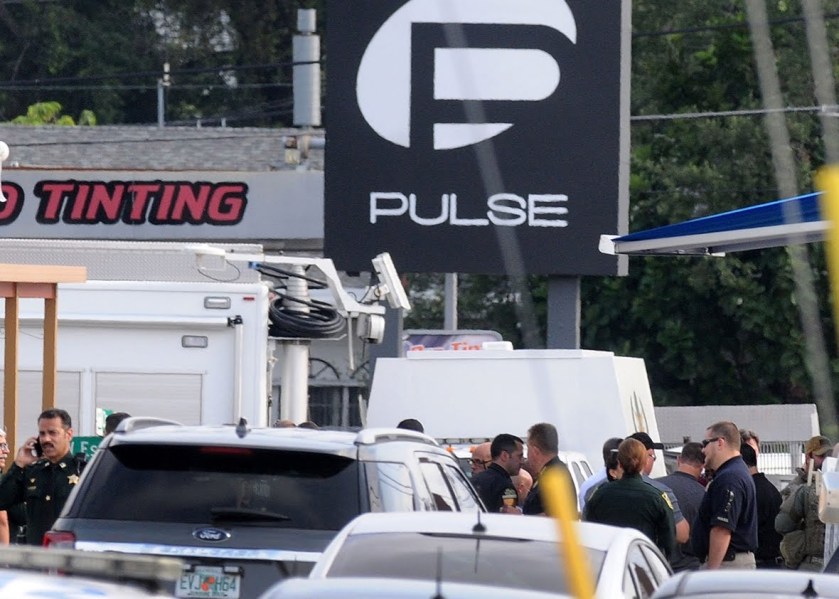 Two days ago a mass shooting occurred in The United States. While sadly this is not an unusual occurrence, the scale and circumstances are different this time. Over fifty people are confirmed dead making it the worst mass shooting the country has ever seen. Many more are wounded and recovering in hospital. The identity of the murderer – who was killed by SWAT police after committing the attack, was confirmed on the day of the shooting as  being Omar Mateen, a muslim American alleged to have pledged loyalty to IS before committing the atrocity. On the day of the attack while Journalists and The FBI were doing their best to slowly piece together what happened, everybody took to Social Media. American Politicians not only expressed their condolences over twitter, they were excessively quick to take advantage of the tragedy for their own purposes.

Hillary Clinton echoed that more gun control was needed ,whereas Donald Trump was quick to criticise The US president for not explicitly mentioning what he perceived as the religious motives of the attack.

Our Biases Cloud Our Judgement

From the little information we had on the day of the attack, it all seemed so obvious. This was The San Bernadino shooting on a much greater scale. A muslim American who had become radicalised, procured a weapon and attempted to martyr himself,  though this time it was specifically targeting what IS saw as the social evils of the west. I had made my own mind up that this must have been the cause. I watched a Sky News interview on youtube with prominent left wing activist Owen Jones and gloated, seeing him so unable to reconcile the inherent contradiction between fighting homophobia and islamophobia. He focused on it being a homophobic attack but didn’t want to acknowledge the obvious religious root of the homophobia, or that there was any parallels to San Bernadino, Paris or other terror attacks.

I watched him walk out of the interview sulking, a perfect caricature of a left wing crybaby who couldn’t handle others disagreeing with him. Owen Jones walking out validated my own biases. It made it my tragedy to exploit and not his.And then more information came in over the coming hours, which proved troubling for anyone who had prematurely made their minds up.

–  According to his ex wife, the couple had been through relationship issues  and he allegedly beat her before they were divorced. She also believed him to be suffering from  bipolar disorder.

–  Despite attending Mosque regularly he frequented the Pulse nightclub and used gay dating apps for hooking up with men.

–  He sympathized not only with IS but also with Hezbollah: a Shia terror group that unlike Al Qaeda, Boko Haram and the other extremist Sunni groups that share common ground, is a natural enemy of IS.

Now there were more factors at play. Omar Mateen didn’t pick an unknown target, he had previously been to the club and seemed to be a repressed homosexual. There was now the possibility that a former lover or someone who had spurned him was attending the club.  Acute mental illness now wasn’t simply speculative, Omar Mateen likely was suffering from it. He also had a history of prior violence before the attack. Suddenly the possibility of the attack being so one sided and so exploitable became less likely and that was unpleasant. The issue was more complex than it being just the issue I wanted to fight. It meant perhaps the other side had some validity. Perhaps the left weren’t as blind or delusional as I thought they were. Perhaps scoffing at Owen Jones for emphasizing the homophobia and downplaying radical islams role over the terror attack wasn’t very nice of me.

The investigation is still ongoing. Ultimately it’s still currently unclear as to how much of a factor Mateen’s faith, mental illness or relationship history and sexuality was in the cause of the attack. Each issue isn’t as obvious as people thought on the day, and now those who took to write angry rants on the need for screening muslims or tackling gun control now come across as myopic and highly insensitive at best, diverting the attention to their own political causes away from the victims and making it their own tragedy.

Every tragedy is a test of empathy and one we end up failing. We want to be personally invested in such a major news story, and if it does transpire that the greatest motive was radical islam, or if Mateen was issued a gun when he was genuinely mentally ill then it validates our own views political positions. It’s not simply politicians that lie when they say their biggest concern is the victims, it’s us too. We all conciously or unconsiously use these events to reinforce our own biases. Rushing to share whatever new tidbit of information came up in our own social media bubble.  The only group that can claim any real solidarity with the nightclub massacre is the LGBT community. It was they who were targeted, even if the motives as to why are still unclear. The only person responsible for the tragedy is Omar Mateen. It’s not sensible gun owners, or muslim’s who attended mosques in other cities that are to blame, or any other scapegoat we wish to lash out at.

The reaction to the tragedy is probably the saddest thing of all. Our self centeredness and NEED to have our opinions and biases validated shows how little our condolences really count for. None of us can truly know what it’s like for the families suffering right now, even if we are LGBT or have lost a loved one in the past. It’s their tragedy, not ours and until the experts have figured out the motives and full cause of the horrific night, then fighting against our chosen scapegoat in the midst of their mourning seems to serve only serve to detract from their suffering.

When tragedy strikes perhaps the thing we need the least is a social media mouthpiece. Perhaps instead of making it our own tragedy by mixing our personal biases in with the event, we leave it to the domain of the victims families and the communities they belonged to.  Next time something of this scale happens, don’t jump to conclusions. Wait until the facts are out before leaving a nasty facebook comment or social media argument you’ll regret. The old adage “If you’ve got nothing worth saying, then say nothing” seems apt. If you’re determined to use a tragedy to preach about gun control, mental illness or radical islam, then for the sake of the victims and their families then at least have the courtesy to wait until the bodies are cold.